The Innocence of Muslims, the controversial ‘anti-Islam’ film shows that online and social media content is a new form of cyber warfare

Sadly, it’s not just cute videos of cats and Korean pop stars that have the potential to go viral.

As we saw this weekend in Sydney, and for the past week around the world, there are far more serious consequences involved when a piece of content makes its way around the world at lightning speed – and far more sinister motives behind its distribution. 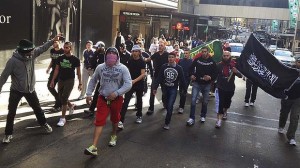 The film that sparked the outrage and violence, The Innocence of Muslims, was reportedly only shown once in a cinema. To a crowd of around ten people. It is a poorly made, embarrassingly crude film that has generated publicity through social media, with the help of a few individuals whose motives, while still unclear, seem to focus on stirring up even more hate between Islam and the rest of the world.

The film has been linked to the murder of the American Ambassador and three other Americans in Libya, and widespread violent protests (complete with US flag burning) elsewhere. In addition, Al-Qaeda has called for Muslims around the world to attack US embassies and consulates – and several have heeded to demand.

In Sydney, several of the most extreme protestors were pictured waving the black flag that has been adopted by Al-Qaeda, and wearing T-shirts and headbands with the words ‘Sixth Pillar’ displayed. This is thought to be a reference to Jihad or ‘Holy War’, declared in some Islamic teachings to be the sixth pillar of Islam.

It was revealed late last week that ‘Sam Becile’, the man allegedly responsible for creating the film, was actually a fake persona created by convicted criminal and Coptic Christian, Nakoula Basseley Nakoula. According to an article in The Australian, US authorities and the Associated Press discovered the links between the ‘Sam Becile’ identity and that of Mr Nakoula after tracing a phone back to Nakoula’s Southern Californian residence.

Even more worrying than the creation of the film is the fact that ‘Sam Becile’ had originally claimed to be Jewish Israeli, obviously intending to direct Islamic anger over the film toward Israel and Judaism. The Coptic Christian link continues, however, with Morris Sadek, a blogger and head of the National American Coptic Assembly, recently outed as the reason the film made it into public consciousness.

According to the Religion News Service, Sadek is translated the film into Arabic (so it could be shown on Arabic news networks around the world) and alerting the Egyptian press to the existence of the film. He allegedly also spread the film through his own social networks and blog.

We blogged some time ago about Stuxnet, a computer virus aimed at disrupting Iran’s nuclear reactors and allegedly created in part by Israel and the US. We also wrote more recently about Flame, the latest cyber-weapon in the mix. If these complex viruses are the heavy artillery, then YouTube videos and social media campaigns are the militia groups of this new, Web-based combat.

Perhaps less sophisticated but no less dangerous, the creation of and reaction to The Innocence of Muslims have shown that digital content, strategically disseminated, has the potential for catastrophic real-world results.