In what is surely the ultimate meeting of old and new media, the Mars Curiosity Rover (which has left an indelible mark on content marketing as well as the Red Planet) has recently been nominated as TIME magazine’s Person of the Year. 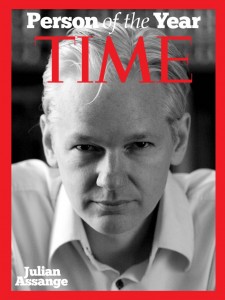 Curiosity is up against some real people for this year’s honour, including Felix Baumgartner, Barack Obama and Psy. If successful, Curiosity will join such luminaries (and questionable figures) as Charles Lindbergh, Mahatma Gandhi, Adolf Hitler, Winston Churchill, John Kennedy, Mikhail Gorbachev, Julian Assange (left) and Mark Zuckerberg who have been awarded the year-ending title at various times in its 85-year history.

If you think it’s odd that a decidedly non-person should receive the accolade, there is a precedent for it. In 1982, ‘the computer’ was named Person of the Year – an appropriate connection given the role computers have played in both the success of the Curiosity Rover project and the steady decline of traditional, printed media.

Of course, TIME has always prided itself on bucking trends – and come the announcement on 14 December, it may have done it again.