A Life in Social Media

Director, producer, TED speaker, 3D VFX artist, compositor, animator, geek, educator, creative human person… that’s how Cesar Kuriyama describes himself. He is also someone who has taken the notion of living in – and on – social media to a whole new level. And in the process, he may just have turned it into an art form. 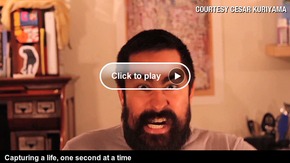 In March last year, The Message asked: ‘Have people become so addicted to social media that now everything has to be viewed through its prism? Are we shortly going to be at the point when eating dinner will be filmed and posted/live streamed? And speaking of streaming… What about going to the toilet? Or brushing teeth? Or opening the office door? Or painting a room (and watching said paint dry)? Is all that social media-worthy?’

Here’s what he’s come up with so far…

So what do you think? Is Kuriyama creating social media art, or is this the action of a narcissist? Either way, if the number of views the video has received (well over a million) on various social media channels like Vimeo and YouTube is anything to go by, it’s proving enormously popular.

And, potentially, it is proving lucrative, with an app funded by crowd-sourcing site Kickstarter set to be launched. Talk about creative content!

@TickYes
The Rise and Rise of LinkedIn