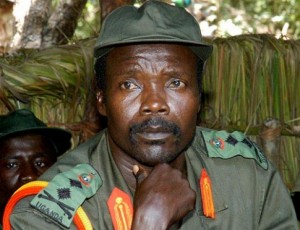 Don’t you just hate it when a whole bunch of people respond enthusiastically to your Facebook invitation, but only a handful can actually be bothered turning up to the party? It’s a feeling the organisers of the Kony 2012 campaign must be all too familiar with after the ‘cover the night’ initiative, in which supporters of the cause were supposed to take to the streets on the night of 20 April and put Kony posters and slogans everywhere.

Of the nearly 19,000 Sydneysiders who indicated on Facebook they would attend the event, Yahoo reports that ‘only around 25’ actually turned up to support the cause in Martin Place.

In Vancouver, things were no better, with only 17 of the 21,000 people who pledged their support on Facebook turning up. (To be fair, 20 April in North America is also known as ‘420 Day’, a date dedicated to celebrating ‘pot culture’. But while pot may have contributed to a few people’s inability to leave their houses, the underwhelming response cannot be attributed to stoners alone.) 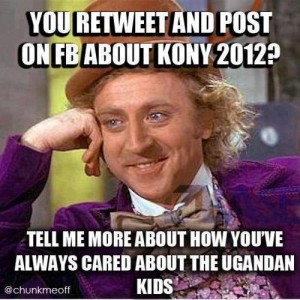 When the initial Kony video was released in February, it amassed a stunning 100 million views in a matter of days, and Facebook, Twitter and traditional media alike were full of hype about the Next Big Viral Thing.

Soon enough, however, cracks started to appear, with almost as many naysayers as supporters contributing to the Kony buzz. Invisible Children, the group behind the Kony film, was questioned over the true motives of the film’s timing, as well as the destination of funds raised.

In response to the doubts, Invisible Children released a follow-up film, Kony 2012, Part 2: Beyond Famous, in an attempt to ‘set the record straight’. Unfortunately, in what is an all-too-common curse of the sequel, it didn’t receive even two per cent of the number of hits of the original.

In fact, it didn’t even reach the number of views of another video released at the same time – footage of Kony 2012 narrator Jason Russell having a very naked, very public meltdown.

Whether it was the questions about Invisible Children’s credibility, the time delay between the hype and the intended action, or simply the fact that in this day and age ‘clicktivists’ are far less likely to get out from behind their computer screens and enter the real world in protest, there’s little doubt that the Kony campaign failed to reach its target.