Twitter’s decision to restrict app-makers access to its data is winning it few friends, but makes sense from a content perspective 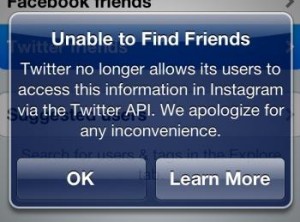 One of the biggest social networks (and content enablers) out there is making some very anti-social decisions by restricting app-makers access to its data.

Twitter has previously had a very app-friendly presence in the online space, allowing apps to sync with users’ Twitter accounts in order to let them connect with their contacts and followers.

This is beginning to change, however, with Twitter systematically cutting off access to sites and apps it deems a threat. Earlier this year, for example, it banned Instagram from accessing its contact data for the ‘find friends’ section of the app, and now it has done much the same with Tumblr, a perceived (and actual) threat to the site due to its size and burgeoning popularity and size.

In an article for VentureBeat, Jennifer Van Grove wrote:

‘Not a one-off instance, the move has been described as a hostile attack on a partner. Others have called it a necessary, evolutionary step by Twitter to ensure that it maintains its hold over the individual relationships that it can sell to advertisers. It comes down to the value of what Twitter calls its “follow graph”: The data that maps the massive network of connections formed by Twitter users following other Twitter users.’

‘There is great value associated with Twitter’s follow graph data,’ said the company in a statement – actually, understatement would be nearer the mark – earlier this year. In fact, the content that users consume on Twitter is the main differentiator between it and other social networks, so logically, if it gives the data away to other apps and sites, Twitter gives away a big reason for people returning to use it.

Still, its easy integration with other apps and sites has long been a feature of Twitter’s focus on usability – and only time will tell if its attack on the competition will prove successful.