Australians have a reputation for being laconic and laid back. There’s not much that we universally take terribly seriously. ANZAC Day is the exception.

We’re proud of the diggers who have fought and died in wars, often under the flag of the old ‘mother country’ England. The 1915 military disaster that was Gallipoli was a coming of age †for our still young colony. The valour demonstrated by the Australian and New Zealand soldiers during that campaign has served as an emotional lightening rod for all Australians ever since. It’s also why ANZAC †Day is celebrated on April 25th – the date when soldiers landed in Gallipoli – every year.

Which brings us to a marketing disaster. With the centenary of the landing only days away, Woolworths, one of Australia’s largest retailers decided to link their brand to the veneration felt †for ANZAC Day. They even spun their ‘Fresh Food People’ positioning line into a tenuous link to the anniversary, complete with a haunting image of a soldier. 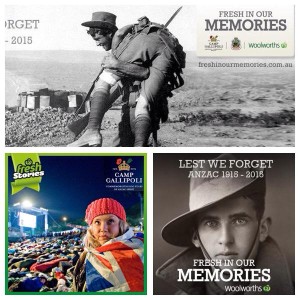 The question of course is how could this campaign have ever seen the light of day? Who approved this? Who had the appalling judgement to not screw this up and throw it in the bin after they first conceived it? It’s massive mis-judgements like this that perpetuate the image of ad agency and marketing people in general in less than flattering terms, as ‘tossers’ living in a ‘creative’ bubble. As a proud member†of the broader marketing industry, it’s†an unfair generalisation. Are there cowboys and insensitive, inexperienced and uncaring†fools in the industry? Definitely;†as there are in most industries.

The difference in the marketing industry is that our mistakes – and unmitigated disasters – are there for everyone to criticise. And rightly so. We’re in the communications business where we take messages / offers from our clients and attempt to compellingly expose them to the largest, targeted audience as possible. The desired audience response is usually to buy what our clients are selling. While some people find this manipulative, my position is that no-one forces anyone to do anything. If you don’t like what we’re selling, don’t buy it. Soon enough, if others are of the same opinion, it will go away never to be seen again.

In this case, the client and their agency deserve all the heat they’re getting.†The campaign and it’s website has already disappeared. No doubt, careers and contracts will be affected. This will be one campaign that will not be boasted about in future job interviews.

Communicators have a great†responsibility to ensure that the emotional responses evoked by their programs and campaigns are appropriate, sensitive and relevant. Linking a brand selling toilet paper, milk and tomatoes with a day commemorating Australia’s servicemen and women, many who died as a result of that service, is ludicrous and abominable.

Please, whoever was behind this, don’t ever do it again. Please, whoever is planning the next great, award winning campaign, use your heads and your hearts. Trampling over sacred emotional ground for the purposes of making a quick buck always has been†and always will be a despicable thing to do.

@TickYes
DONíT Send Flowers (If You Want to Keep a Customer).
Loading Comments...