Hey you, Apple fan!  Got your eyes on the new iPhone 5?

Want to buy it but your budget just won’t allow it?  Feeling helpless, hopeless and frustrated?  Well, don’t swim in self-pity, it’s not yet the end of the world and besides, Apple has one big announcement for you.  According to reports, the Cupertino-based company will soon allow trade-ins.  Yes, you heard that right, my friend!  The people from Apple have heard our prayers!

In an aim to push customer retention, Apple fans can now get the newest iPhone at a fraction of the cost by trading in their old Apple phone and getting a discount on the iPhone 5. 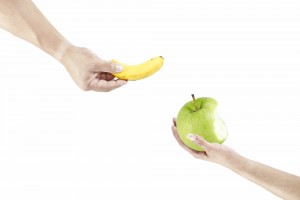 In a report published by Bloomberg, the new service will be implemented in Apple stores this month. Sources who asked not to be identified since Apple has yet to confirm the news, say that the electronics company has already partnered with Brightstar Corporation, a mobile-phone distributor, for this new program.

With this new mobile marketing strategy, Apple’s new CEO, Tim Cook, hopes to lure consumers to get its newest iPhone offering. This is a move to revive the dying sales of the once biggest company in the United States, and even the world.

According to a report by the Wall Street Journal, Apple’s shares have been bouncing back and forth from the top spot against oil company, Exxon, since 2011.  However, Apple started soaring high from January 2012, peaking at around August-September of 2012 and only slumped back down to second place against Exxon at February-March 2013.

Just as well, Apple’s smartphone market shares haven’t really zoomed up since its unveiling of the first generation iPhone in 2007.  With this, it’s not hard to think that Apple’s campaigns aren’t really working for the company.  But this may all change once the iPhone trade-in program starts.

However, Apple isn’t the first to start this program, sites and stores like Gazelle, Best Buy and Radio Shack have been doing it for some time.  The first two even offer this as an online strategy, where you can start the trade-in process over their websites.

“The biggest challenge for us has been to change consumer behavior.  It will be great to see Apple jumping into it.  We expect them to put the brand and marketing behind it and lift consumer adoption,” Gazelle CEO Israel Ganot told ABC News. “There is an insatiable demand there.”

While people like you are still waiting for Apple to officially confirm this new program, you may try checking out these other sites that offer the same service:

• Best Buy. This retailer will allow you to trade-in your smartphone, as well as a range of other devices. You will receive an electronic gift card for the trade which you can then use when you purchase a new smartphone.

• Gazelle. The site has been around since 2007. It might be one of the easiest trade-in services since everything is achieved online.  Gazelle will give you an online offer for your gadget.  If you agree, you ship it to them and then you get paid by cheque, Amazon gift card or PayPal.

@TickYes
Is the PC Really Dead?