Are Online Events the Future of Live Entertainment?

Exhibit A is winter music festival Splendour in the Grass. This year’s event takes place in July, with an A-list line-up that includes Kanye West, Coldplay and Jane’s Addiction. But initial excitement quickly gave way to anger as punters discovered they would have to fork out $526.65 – each! – for the music-and-camping event. Add to that the cost of $7.50 drinks and you’ve got a three-day weekend that will put a bigger dent in your wallet than a four-day package deal to Fiji.

Not that Splendour is the only high-charger. These days, the big festivals all come at a hefty cost, with this year’s Byron Bay Bluesfest (which gets underway today) costing around the same amount.

Sure, the acts are getting bigger, the festivals are getting more popular and the planning that goes into them is a year-long job. But is the price tag ruining the bohemian festival experience by fostering an environment that only young professionals can afford?

How are students, formerly the largest demographic on the festival scene, ever to manage the cost of even one per year? 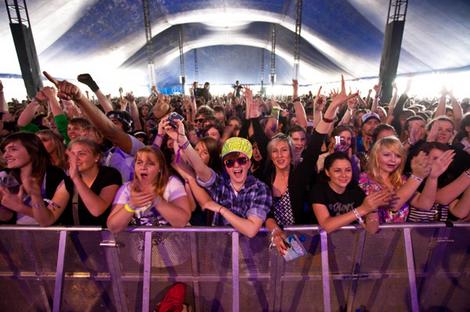 Heavyweight American festival Coachella has turned to social media for a solution, deciding to stream this year’s festival (which took place from 15-17 April) live via YouTube, complete with a real-time tweet-stream at the bottom of the screen.

Although there wasn’t the smell of sweat, the unique live buzz remained pretty much undiluted through the immediacy of the Internet, with users expressing their excitement via social media. The hype created moved through the virtual space faster than the rumour of a Kate Moss sighting spreads through a physical festival crowd. Plus, it created an opportunity to engage with content that would otherwise have been missed.

With the cost and distance of some of the best gigs rendering them inaccessible to many, social media has stepped up to deliver content to the eager masses, and Coachella has set a global standard that is sure to catch on.

Ironically, whilst festivals are considered ‘hip’, the way forward has been shown by an institution that is variously described as ‘out of touch’, ‘an anachronism’ and ‘irrelevant in the 21st century: the royal family.

Which brings us, briefly, to Exhibit B: the wedding between Prince William and Kate Middleton. The 29 April nuptials will be streamed live on YouTube, supported by a live multimedia blog. It’s all part of ‘the couple’s wishes to make the wedding as accessible as possible for as many people as want to participate’.

So if an inherently conservative institution weighed down by 1000 years of history can embrace the marketing potential of engaging online content, the signs are positive that the world is finally ready to embrace the future.