Back to the future

The idea of a hotel on the moon may have made little technological sense, but it was great content marketing

Over 10 years before Neil Armstrong set foot on the moon, and even before JFK’s famous 1962 ‘we choose to go to the moon’ speech, marketers were busily making the most of mankind’s fascination with our closest cosmic neighbour to use a futuristic pitch to sell a contemporary product.

Although the term ‘content marketing’ didn’t exist in 1958, the practice was already being utilised to help increase brand awareness and boost sales. Which is why the rumour that the Hilton hotel change was planning the first lunar hotel was so quick to take hold.

This fascinating BBC article reveals how the story began with an ‘Out of this World’ floor show at the Chicago Hilton – which was reported by a local newspaper as ‘this could mean that the Hilton chain is dickering with the idea of opening the first hotel on the Moon’.

From that simple sentence came instant acceptance from pop culture – from The Jetsons to 2001: A Space Odyssey to Mad Men – that when it comes to hotels of the future (hotels that are literally out of this world), the Hilton name is always and irrevocably associated with them.

Whether this first-rate branding exercise was, in the first instance, planned or accidental remains a matter of conjecture, but it does seem that Barron Hilton, the chain’s vice-president in the 1950s and son of founder Conrad, was ‘a true evangelist for a Hilton on the moon’. And regardless of how serious the plan was, its usefulness as a marketing exercise was second-to-none. 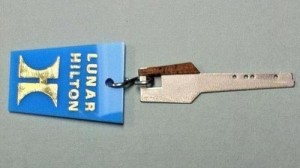 The company ensured articles appeared in national magazines like Cosmopolitan (with Barron Hilton predicting that he would be opening a lunar Hilton within his lifetime) and printed promotional reservation cards and keys to coincide with the increase in ‘space fever’ as putting a man on the moon became a reality at the end of the 1960s.

There was even a specially written tourist pitch, in the vein of today’s brochures:

Imagine yourself in the Galaxy Lounge of the Lunar Hilton – the first hotel on the Moon. In place of a ceiling, a transparent dome allows you to view the heavens as you never could see them from beneath the thick atmosphere covering Earth, Mars looks bigger and redder, the star do not twinkle, and you are just in time to watch an Earth-set.

You order a martini. The bartender pushes a button and out comes a pre-measured, pre-cooled mixture of pure ethyl alcohol and distilled water – 80 proof. Into the mixture he droops a gin and vermouth tablet. As you sip the result, the huge bright-blue Earth slips below the stark, brown horizon and you begin to think about a freeze-dried steak for dinner.

Fanciful? Perhaps. Realistic? Obviously not, with the benefit of half a century’s hindsight. But compelling, enticing, engaging and keeping the Hilton brand fairly and squarely in the forefront of the global eye (in much the same way as Paris Hilton keeps her personal brand out there these days)? Absolutely. Out of this world content marketing, in other words.