An interesting story is emerging from North Korea. Surprisingly, it has nothing to do with rocket launches or tensions with South Korea. Rather, it centres on the visit currently being made to the ‘pariah state’ by Google executive chairman Eric Schmidt. 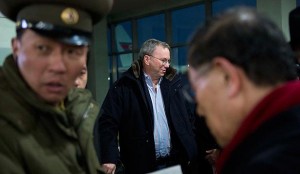 Although officially billed as a ‘private, humanitarian mission’, Schmidt’s travelling companion, former New Mexico Governor Bill Richardson, said of the high-profile executive, ‘I’m sure he’s interested in some of the economic issues there, the social media aspect’.

Richardson declined to elaborate on what the ‘social media aspect’ might be, but it is tantalising to think that one of the world’s most secretive countries may stand on the verge of being ‘opened up’ (in a similar vein to Burma/Myanmar) and that social media may play a part in that.

Of course, this may simply be a question of Kim Jong Un and the other leaders in Pyongyang bowing to the inevitable – as even China has been powerless to stop the spread of social media, despite the lengthy ‘cat and mouse’ game its censors have played with Google.

It seems inconceivable that, in a country where the Internet is strictly regulated, the North Korean leadership would allow completely free and unfettered access to the World Wide Web or an uncensored social media landscape (although, as The Message has pointed out before, those ideals are arguably unattainable anywhere). Nevertheless, the country is certainly endeavouring to modernise its infrastructure by modernising farms and digitising factories, with Kim Jong Un recently delivering a keynote speech in which he cited expanding science and technology as a means for improving the country’s economy as a key goal for 2013.

Seen in that context, the visit from the man who oversaw Google’s expansion into a global Internet giant is certainly a timely one.