A year after the death of the world’s most-wanted man, documents including his diary are being turned into online content 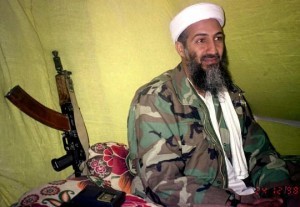 On 2 May, 2011, the news broke that Osama bin Laden, al-Qaeda leader and the world’s most wanted man, had been killed in a US operation in Pakistan. Like the organisation he headed, bin Laden refuses to go away – although that seems to be in part because American officials, from President Obama down, don’t want him to go away.

It has just been announced that documents found at the compound where bin Laden was killed will be posted online this week by the US Military Academy’s Combating Terrorism Center. The papers reportedly include bin Laden’s hand-written diary and communication between him and his associates that reveal he considered changing al-Qaeda’s name as so many of the group’s senior figures had been killed.

Bin Laden’s personal musings may not garner the headlines of the Hitler diaries 30 years ago (or even last week’s news that Mein Kampf is to be reprinted, but the fact that they are being turned into online content shows how far the digital medium has come as an outlet of choice (and doubtless pre-empts them being published on Wikileaks down the track).

But questions are also being asked about the timing of the announcement – as the presidential race between Obama and Republican challenger Mitt Romney starts to get serious. The BBC’s North American Editor, Mark Mardell, makes several interesting points in his assessment of the issue:

‘It is hardly surprising that President Obama wants to use Bin Laden’s death as a symbol. It may not be the only success of his administration. But it is the only one unadulterated by party politics.

‘The only one that was celebrated by just about every American, of every political persuasion. It was greeted with glee by some of those who might usually see Mr Obama as weak on national security.

‘When some worry that he is a consensus-seeker, a ditherer, this version of the president is a gutsy risk taker. The crudeness of the presidential pitch may put some off, but any row that is created only serves to highlight that Bin Laden was indeed killed on Mr Obama’s orders.’

And coming at a time when this Bill Clinton-narrated campaign video makes even more of the bin Laden operation, it raises the suspicion that this particular content is politically motivated.