Blessed are the tweeters

Even the Vatican is embracing social media and content marketing 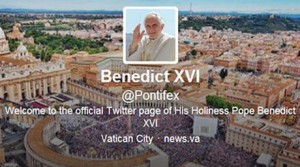 Forget life imitating art, here we have a classic case of life imitating The Message. In January 2012, in a post called iBelieve, we wrote: ‘If organised religion wants to live past this generation, it has to make like every other big business and stay visible.’

Then a couple of months later, in a post imaginatively titled iBelieve (part 2), we reported that ‘the spread of social media-savvy religion-related content has reached, well, biblical proportions’.

And now, with a well-known religious festival almost upon us, it seems entirely appropriate that the head of the Roman Catholic Church, Pope Benedict XVI, has taken to Twitter (as @pontifex). According to the Vatican, the Pope will be using the social media microblog to tweet ‘pearls of wisdom’ in eight languages, answering questions sent to him regarding matters of faith.

‘The Pope’s presence on Twitter is a concrete expression of his conviction that the Church must be present in the digital arena,’ the Vatican says. Which shows that even the 2000-year-old Catholic movement understands how social media and content marketing can be a massive benefit in the digital age.

At time of writing, the papal twitter account has 501,936 followers. Although that figure is a mere fraction of the planet’s 1.2 billion Catholics, it is a remarkable number considering Pope Benedict has yet to send a single tweet. Now, cynics may call that blind faith, but in fairness the Vatican has said the account won’t be used until just before Christmas.

Still, it will be interesting to see whether the Church fully embraces social media to the extent some have done. Speaking personally, we can’t wait to see the Instagram images of the pontiff’s Christmas dinner…