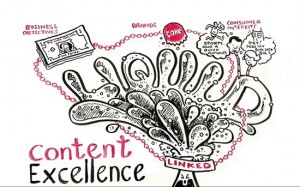 The Message has long been a fan of how Coca-Cola markets itself across a variety of platforms. From film clips to Facebook, the soft-drinks giant clearly understands the importance of creating engaging content as not just a marketing tool, but a whole marketing strategy.

In fact, Coke takes content so seriously that it has recently released a new approach. Called ‘Content 2020’ it is essentially a manifesto highlighting how the company ‘will evolve its approach to the creative agenda on its key brands’.

The key point is that Coca-Cola plans to ‘move from creative excellence to content excellence… to create ideas so contagious they cannot be controlled’. Talk about an inspiring vision! Coke doesn’t just want to be part of the conversation, it doesn’t just want to sell products (although, obviously, that remains the goal), but it wants to do that by earning, in its own words, ‘a disproportionate share of pop culture’.

In other words, Coca-Cola wants to be up there with The Beatles, Jack Kerouac, Andy Warhol, Apple, Muhammad Ali, the PC, mobile phones, social media, Lady Gaga and everyone and everything else who/that has shaped and changed the way people think and live.

The plan is to start with brand stories that provoke conversations that Coca-Cola constantly acts on and reacts to. So why is it doing this? Because the paradigm has shifted – because content is changing, with user-generated content becoming more important as a result of social media and mobile content creating an ‘on demand culture’.

Coca-Cola acknowledges that it has looked at other brands and business models for ideas/inspiration about how to best create this greater engagement. But we’re betting it will end up being better than any of them. And as a template for creating a successful content marketing strategy for all businesses great and small, it takes some beating.

This video explains Coca-Cola’s ‘Content 2020’ strategy in detail. Although there won’t be a quiz at the end of it, it’s still not a bad idea to take notes…