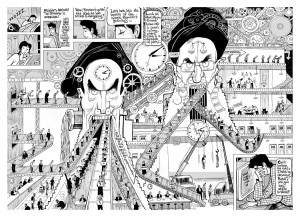 Using social media as a means to spread anti-establishment messages grabbed the headlines last year – especially in the Middle East where platforms such as Twitter and YouTube were credited for the popular uprisings in Egypt, Tunisia, Libya and, still, Syria.

Inspired by the ability of online content to reach and stir the masses, three unlikely collaborators – an Iranian author (Amir), an Arab illustrator (Khali) and a Jewish publisher (Marc Siegel) – have combined to create a web comic satirising and critiquing the events that unfurled in Iran following the disputed 2009 elections.

The result is Zahra’s Paradise, a story centred on the search for a young protestor, Mehdi, who ‘has vanished in an extrajudicial twilight zone where habeas corpus is suspended’. The authors remain anonymous (for obvious reasons), but have created Mehdi’s story and the search for him by his mother, the eponymous Zahra, from a composite of the real people and stories told at the time and subsequently on social media.

Zahra’s Paradise has been published in hardback (and translated into a dozen languages), but as Amir tells the BBC in this fascinating video interview, the online version was not only able to bypass the censors more easily, but also reach a wider audience.

Which is, of course, the power of online content.

@TickYes
The sound of music?