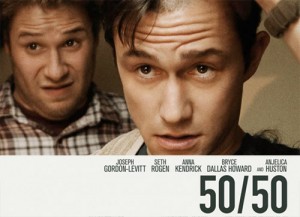 The twist is that 50/50 is inspired by a true story very close to screenwriter Will Reiser’s heart – he’s the one who had the tumour.

Perhaps it is Reiser’s unique perspective on the experience that gives him the ability to treat the subject with such an exquisite balance of respect and levity, or perhaps he’s just an exceptionally talented writer. Either way, the result is a film that has you hanging on until the very last (and not just to see whether or not the main character does…

The character of Adam (based on Reiser) is played by Joseph Gordon Levitt, who is possibly one of the most underrated actors of his generation. He’s a cautious, quiet guy who gives the impression of having been stomped on by life a fair bit (and that’s before the tumour!) His best friend Kyle is played by Seth Rogen, who is the actual basis for the character – he’s good friends with Reiser, and actually helped get the film produced.

Anna Hendrick plays the brilliantly awkward and inexperienced Katherine, assigned by the hospital as Adam’s therapist to help him deal with the situation. Angelica Houston does an incredible job as Adam’s overbearing mother, not only dealing with a husband in the advanced stages of dementia but desperate to make a connection with the son who’d rather forgetten she existed.

A lot of films have dazzlingly funny moments and take-the-wind-out-of-you sad moments, but not many films manage to do both at the same time.

The title 50/50 may well be a prediction for the kind of scores it will receive from critics, but for our money this little gem should be rated far higher than that.