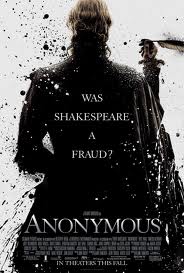 It is difficult not to compare this film to Shakespeare in Love, and in many ways Anonymous suffers as a result.

While the plot is busy being torn apart by history and literature buffs alike on social media, that wasn’t the problem. In fact, it was well thought-out and engaging. Come to think of it, with the exception of Shakespeare himself, the characters were as well. Rhys Ifans played a powerfully intense Edward de Vere (the Earl of Oxford), and Vanessa Redgrave was unsurprisingly brilliant as Queen Elizabeth.

There is unrequited love, mystique, intrigue and a fair dose of swashbuckling action. The special effects were spectacular, which is unsurprising as this is clearly where director Roland Emmerich (the man who brought us such films as Independence Day, 2012 and The Patriot) is most comfortable.

And perhaps this is where Anonymous comes unstuck. People who go to see a film about Shakespeare generally want to revel in the veiled references, the parallel storylines and the clever jokes. After all, this is what Shakespeare (or de Vere, or whoever else is thought to have written the works) did so well.

The film isn’t about Shakespeare the man, it is about the work that is his legacy. This, more than ever, should have been reason to let the magic of those works craft and shape the story. Sure, present your conspiracy theory, but be clever. Use the gifts of language and humour and weave them into your tale, and you’ll have a much better time convincing people that you know about Shakespeare – whoever he was.