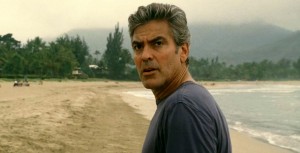 There is a line, early on in The Descendants, in which George Clooney’s voiceover describes his family as an ‘archipelago’, as we see the islands of Hawaii pass beneath a plane. He says that, much like the islands beneath him, his family is part of a whole – but still separate and alone, and drifting ever further apart.

The same can be said for the audience and the movie. We’re all in the same theatre together, but viewer and film are oddly disconnected.

The story follows Matt (Clooney), a rich lawyer living in Hawaii whose wife Elizabeth (Patricia Hastie) has just suffered a boating accident and lies in the hospital in a coma. When doctors tell Matt that she is not going to wake up, he is forced to deal with the reality of parenting his two daughters alone, when he is a self-confessed ‘back-up parent’ who has no idea what he is doing.

Alex (Shailene Woodley), 17, is a troubled teen who has been attending an exclusive boarding school on a neighbouring island. Scotty (Amara Miller), 10, is a tween clearly struggling with the situation, albeit largely ignored by her father and older sister throughout the film.

To complicate matters, Alex soon reveals that the reason she had been at odds with her mother before the accident was that she caught her having an affair, and was planning to tell her father.

The storyline is incredibly engaging and yet, on screen, the characters are not. Matt operates on a virtually emotionless level throughout the film, spending his time gallivanting across Hawaii to locate the man his wife was having an affair with instead of allowing his daughters precious time with their nearly-dead mother.

The Descendants is currently garnering rave reviews and (along with recently sweeping the Golden Globes) plenty of Oscar buzz. But for something that is the emotional equivalent of Valium, it’s hard to see what all the fuss is about.

@TickYes
You say you want a revolution