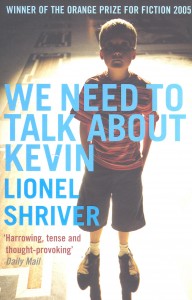 The book won the Orange Prize and had people heatedly debating it for months after it was published, and now the film adaptation starring Tilda Swinton and John C. Reilly (let’s just pause to consider the brilliance of both these actors…) is doing much the same in terms of online debate.

For those who have not read Lionel Shriver’s novel, We Need to Talk About Kevin is a searingly honest, painful and uncomfortably close look at several social debates: Is nature or nurture more responsible for the way a person turns out? Do all women have innate maternal instincts, or is it something that can be learned? Are women defunct somehow if they don’t want children? If they don’t want children and have them anyway, will they automatically love them, or will their resentment damage the child?

All of these questions and more are handled superbly in the book, and while it’s tempting to say the same of the film (because the acting and cinematography are so good), the latter does fall short in terms of an intellectual look at these issues.

Rather, the film is a visual representation of the pain of the book – at times so much so that it hurts to watch the screen – but it lacks the honest descriptions by Eva, the central character, that made the book so cringingly good.

The premise is that Kevin, the son of Eva (Swinton) and Franklin (Reilly), has committed a terrible crime. The story is set in the aftermath of this crime, as Eva examines her role in events through a series of flashbacks. As the film progresses, we are not quite sure who the real victim is – is it Eva, plagued by a psychopathic child she never wanted? Or is it Kevin, who from birth could sense his mother’s resentment?

The questions that are raised in the film far outnumber those that are answered, and if you haven’t yet read the book make sure you do that first. Then find someone else who has, because you’re going to need to talk about Kevin.