New technology allows parents to remotely switch off their childrenís phones, read their texts and see what websites theyíre visiting in the name of safety. But should they be allowed to?

ëControlling childrenís contentí ñ itís an ominous heading; one that conjures up images of censorship and totalitarianism. But for many parents, knowing what sort of mobile content their children are accessing provides much-needed peace of mind in the Smartphone age. 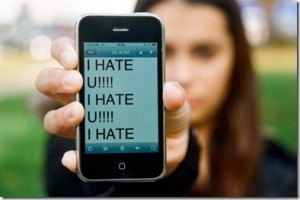 A new initiative in the UK promises just that. Called Bemilo, it bills itself as the UKís ësafest mobile networkí and is designed specifically for children. The company surveyed 2000 parents, who revealed that 40 per cent of their children aged eight to 16 who have a mobile phone are sleep-deprived due to using their phone late at night, while 25 per cent have been subjected to mobile phone bullying.

Bemilo (which runs on the Vodafone network in the UK) believes it has the answer with its ësafety packí. Costing £2.95 (about $4.70) a month, the pack features a SIM card that, once installed in the childís phone, can be remotely managed from a computer to prevent the child going online, making calls or texting during certain times.

Bemilo founder Simon Goff told the BBC: ëIt enables parents to have full control in the context of safety. They can allow or disallow certain contacts to call them and they can set the times of day the phone can operate.í

Mr Goff also said that parents would be able to read their childrenís text, which, may seem like an invasion of privacy to some, but given that a report commissioned by the National Society for the Prevention of Cruelty to Children in the UK found that ëteenage girls were coming under increasing pressure to text and email sexually explicit pictures of themselvesí, itís a step many parents around the world would be willing to take.

The Bemilo safety pack has drawn the support of groups in the UK, with Dr Katherine Rake, CEO of the Family and Parenting Institute, saying: ÝëTodayís generation of children are facing new pressures, such as mobile phone bullying, and parents want help in protecting them.í

The Message is brought to you byÝTick YesÝñ providing solutions for all your digital and content marketing needs.