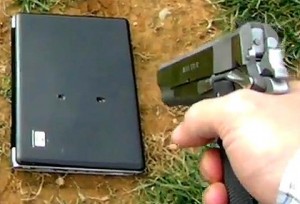 We’d never recommend this as a course of actions for organisations wanting their video content to go viral, but it seems that firing a number of shots from a handgun into a laptop is a sure-fire recipe for YouTube success.

Interestingly – and ironically – the actions of a disgruntled parent against his equally disgruntled daughter’s obsession with social media has become the social media success story of the year to date.

The video in question is called ‘Facebook Parenting: For the troubled teen’. At eight minutes, it’s one of the longer video posts – but it’s also one of the most effective. The postee is one Tommy Jordan, whose 15-year-old daughter took to Facebook to moan about the chores she has to do around the family home.

In fact, said 15-year-old girl was so outraged at her seemingly Cinderella existence that she swore frequently and often on the Facebook post in question. Which is what provoked Tommy to take matters into his own hands (which happened to be holding a .45 handgun) in a display of what he calls ‘tough love’…

Tommy Jordan originally made the video to post on his daughter’s Facebook wall, thinking a few hundred people would see it. Five days and 22 million (and counting) views later, the video has already come to epitomise viral content in the social media age.

Tommy’s actions have received praise and condemnation in equal measure – with the division coming largely on generational terms. Parents are mostly supportive, posting comments on YouTube like ‘Way to go, man!’ and ‘Tommy
Jordan for President!). Their children are less impressed, decrying the destruction of one of their fellow iGener’s personal property (‘He geeks me out so much, he’s exactly my dad down to the goatee’).

So if anyone thinks social media doesn’t truly reflect modern society, this video and the responses to it show otherwise. Online content just became even more significant.

@TickYes
The perils of voice recognition