Somehow everything in this world, especially in media, is greatly affected and has a strong relationship with the online world. And while this may be a great gateway into a future where everything is simpler to inquire, acquire and achieve, this could also mean the death of the print industry. 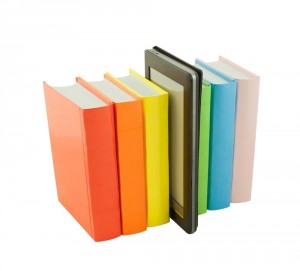 You probably have an iPad, a Kindle, a Nook or something that resembles a rectangular bond paper-size plank which can store your files, documents and even your books.

You probably don’t have a printer because who needs one when you can send and receive everything through an online platform.

You probably belong to the digital age. Hello laptops, smartphones and tablets!

The digital age has hit the print industry hard in the past few years.  Statistics have proven that print media – especially newspapers – have dropped in number, market sales and advertising revenue while digital marketing flourishes.  According to Statista.com, in 2011 there were only 1,382 dailies in the U.S. market, a big drop from 1985 when there were 1,676 of these papers.

Just as well, newspaper advertising has also been greatly affected, which could also be why the newspaper companies had to shut down. Content marketing hasn’t been good for print either. The eMarketer reports that by 2016 advertisements on papers will drop by 4 billion from 2011 to just $16.4 billion. Classified ads also hit a big slump, from 2000’s $19.6 billion it fell to just $5 billion in 2011. Recruitment ad posts were also among the most affected. According to the State of the Media, from 2000’s $8.71 billion it dropped to a lousy $740 million in 2011. 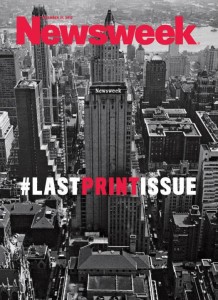 In October 2012, Newsweek announced that it will cease printing the news magazine, instead they will continue operation through the Internet. After 80 years of offering America the news on paper, the company decided to stop printing and instead opt for digital means, embracing the truth that print is slowly dying and online communication is the future.

In December 2012, Newsweekly printed its last hard copy magazine. As a tribute to its vintage years, the magazine chose a black and white image of its old New York headquarters as its cover.  But welcoming its internet future, the image was accompanied by a hashtag, #lastprintissue.  Newsweekly’s final print issue became a strong image as it became a representation of the multiple campaigns to bridge the past and the future.

“This is not a conventional magazine, or a hidebound place. It is in that spirit that we’re making our latest, momentous change, embracing a digital medium that all our competitors will one day need to embrace with the same fervor. We are ahead of the curve,” Newsweekly Editor-in-Chief  Tina Brown wrote on her final editor’s note in print.