Digital Marketing Lessons To Be Learnt From Donald Trump

Love him or hate him, Donald Trump has made the race for the White House fascinating. And fascinating doesn’t happen by chance.

Exceptional marketing combined with good old fashioned, in-your-face salesmanship are central to the success of his campaign – so far.

So putting aside your opinion on his politics, let’s look at what can be learned from Trump’s ‘Making America Great Again’ campaign. Contrary to the opinion of many, Trump is no fool and knows his audience incredibly well. He has identified the pain and passion points of his supporters and has moulded his campaign accordingly.

As a digital marketer, this should be the first thing you do when devising a strategy. You need to know who you’re targeting, how to address their needs with valuable content and then get them to take action.

Yes, it sounds obvious but it’s astounding how many digital campaigns don’t have any compelling customer reasons for being.

Engage Your Audience at Every Touchpoint
Trump is particularly well-known for his power to motivate, outrage, and entertain his audience on Twitter but it’s not the only platform that his campaign uses.

Today’s campaigners are connected through multiple digital channels and are faced with an array of methods to reach out to their voters. This brings opportunity and challenges in equal measure. Get your content’s message, tone, and platform right, and you’ll win loyal supporters. Get it wrong, and your audience clicks over to the next hot thing.

Engaging with your audience through relevant social media platforms is important. While Facebook will always take a leading role, this year’s election campaign has seen candidates reaching beyond the social giant to more niche platforms like Instagram and Snapchat.

Zig when Everyone Else Zags
From suggesting he paid Hillary to attend his wedding to the claim that Ted Cruz’s father was involved with JFK’s assassination, Trump marches to his own beat.

He does the opposite of what other politicians have been taught to do, but clearly it’s working.

Hillary Clinton says that all is wonderful with the USA; Trump says the complete opposite. By graphically highlighting the country’s problems real or supposed he offers the ultimate solution: him. America will only be great again if you vote for Trump.

The takeaway here is to take chances. Do something different. When everyone is focusing on eBooks and blogs, create a podcast or set up a Periscope account. When everyone goes horizontal, go vertical.

Want to Stay in the Game? Don’t Be Boring! 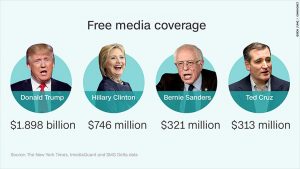 How many times have you listened to Hillary Clinton, Jeb Bush or Ted Cruz? Do you remember a single thing they said or tweeted? I can’t either.
So how about The Donald?

Like most of us, I can easily rattle off any number of quotes, tweets and incidents from his campaign. Many of Trump’s tweets have taken on a life of their own, garnering enormous global coverage.

What does this tell you about his marketing?

Right from the outset, Trump has been outrageous, disrespectful, rude, controversial and, without fail, utterly compelling.

While his opponents were trying to cut through by spending many millions of dollars on advertising, Trump’s messages and style have earned him more free publicity and media time than all of his erstwhile Republican opponents: combined.

In the marketing world, Trump’s content stands head and shoulders above his competitors and makes people take notice. As a marketer, if you market the same old boring content everyone else is putting out there, no one’s going to see it or care.

Build Rapport with Everyone, Even the Haters
This is a risky way to approach a digital marketing campaign but if your brand is ready to take a little heat, you can even get value from your haters.

Of course, while most of us don’t want to “feed the trolls,” Trump has a knack for beating his detractors
to the punch. When Ted Cruz didn’t endorse Trump on day three of the RNC, Trump was quick to tweet about it and turned a negative into a positive. Brave and smart.

Manage Your Brand or Domain
You may have heard about Trump redirecting Jeb Bush’s website to his own. Due to poor brand management, Bush’s team forgot to renew payment for their domain which meant that the address became available to anyone else. Trump’s team grabbed the opportunity and automatically redirected all visitors to his website.

Lesson: don’t be a digital dill. Make sure your domain payments are up-to-date or outsource management to someone who knows what the hell they’re doing!

Lessons Learnt
Trump understands just how dramatically digital communication has changed the way we engage and has invested in his online presence. He has more than 23 million social media followers / likes, dramatically more than any his competitors for the Republican nomination. And 50% more than Hillary Clinton.

Like any successful digital marketer, Trump maintains an active presence and regularly tweets, posts and interacts with both friends and foes alike. He also stays abreast of the latest digital trends (he announced his intention to run on Periscope).

Offensive, buffoonish or smart? Whatever you feel about the man, there’s no denying his masterful use of digital marketing. There a thing or two we can learn from The Donald; or at least from his campaign.