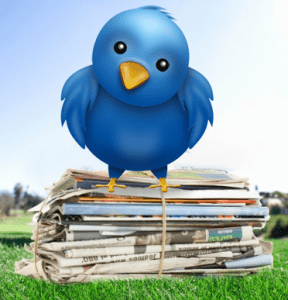 Because of its compatibility with real-time news reporting, Twitter will always have the upper hand over Facebook when it comes to getting up-to-the-second info on what’s going on in the world. (Well, at least until Zuck decides to open the purse once more and buy it!)

It’s why so many people use their Twitter feed as a ‘best of’ list of world headlines, bypassing traditional media – and other forms of social media – to find the latest on everything from natural disasters to celebrity scandals.

For its part, Twitter has embraced its position as news publisher with gusto, constantly enhancing its search capabilities and hash-tag functionality to aid people who want the facts as they happen.

Yet it’s not only ‘as-it-happens’ news that Twitter wants a handle on. The announcement that it is now offering Twitter users a weekly emailed recap of the most popular news-feed stories could see the micro-blog site eventually becoming the newspaper of choice for many.

‘Stories feature a design similar to the recently updated Discover tab, emphasizing who shared each story beneath summaries to help you decide which ones matter most to you. Click any headline to finish reading the story, add your take by tweeting directly from the email, and see related Tweets from the people you follow.

‘This new email digest also features the most engaging Tweets seen by the people you follow, even if you don’t follow those who wrote them. You can see who from your network retweeted or favorited these Tweets and click “View details” to retweet, favorite, reply or view the conversation around them.’