Social media content proves to be a lifesaver – again! 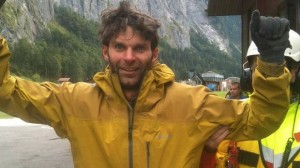 Back in April The Message reported that Twitter had turned superhero when it helped save a carjacking victim in South Africa. Well, now it’s Facebook’s turn to don the cape and pull its undies on over the top of its tights…

British businessmen Dan Hunt was ‘speedflying’ (part-paragliding, part-skiing) in the Swiss Alps recently when he went missing after failing to land at the arranged spot in the Lauterbrunnen Valley.

Mr Hunt’s two friends raised the alarm and a search was launched. However, when Dan’s insurance could no longer cover the cost of search helicopters, it was called off. And that’s when… (trumpet fanfare, please) Facebook came to the rescue.

At least, that’s when Dan’s friends and family members took to the social media supersite to raise awareness – and money – for his plight. The group set up a page called Find Dan Hunt and through it managed to raise over $25,000 to keep the search going.

The money raised paid for helicopters, mountain guides and search dogs to scour the mountainside – until Mr Hunt was eventually found in a cave at the bottom of a 45-metre gorge three days later. Although shaken and hungry, he was uninjured and said to his social media saviours: ‘I am so grateful, touched, and humbled by all the help… thank you from the bottom of my heart.’

@TickYes
Apple of their eye