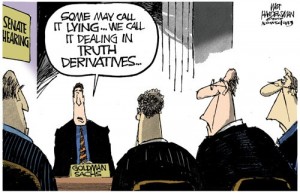 On Wednesday, the New York Times published a damning op-ed written by Greg Smith, a former executive director for Goldman Sachs. The piece explains in detail why he is leaving the company after 12 years of service, and paints an ugly (though unsurprising) picture of the culture within the firm.

The piece – entitled ‘Why I Am Leaving Goldman Sachs’ – has been passed around the Internet like a virtual hot potato, and has already sparked several trending topics on social media.

While the viral piece is indeed a great read, it has also become something of a meme, with several Internet merry-makers snapping up the chance to write their own spoofs.

The Daily Mash has published a pretty clever example – a letter from Darth Vader explaining why he has quit the empire.

Andy Borowitz, a comedy writer, has penned a spoof client letter from Goldman Sachs, advising shareholders that Joseph Kony will be henceforth taking over their accounts.

There are a whole host of memes circulating at the moment, and surely more to come, and we at The Message are waiting with baited breath for the ‘Sh*t People Who Are Quitting Goldman Sachs Say’ video…