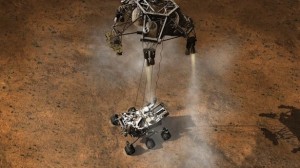 Curiosity may have killed the cat, but it has been a real shot in the arm for NASA and an online-content success story. Why? Because not only is NASA’s Mars Curiosity Rover the largest, most expensive, most complicated and most intelligent machine we humans have ever sent to another planet (making its successful, undamaged landing rather important), but as demonstrated by the social media response to recent events, it shows that the space agency can still hold the attention of the world.

The Curiosity mission has an estimated budget of US$2.5 billion, but coming on the heels of the retirement of the space shuttles, questions were being asked about the wisdom of the mission. Indeed, if Curiosity had ended up a mass of molten metal on the red planet’s surface, there was a strong chance NASA’s planetary science division would have been shut down.

Instead, US president Barrack Obama led the tributes, calling the mission’s success ‘an unprecedented feat of technology that will stand as a point of national pride far into the future’.

But in amongst the remarkable scientific and engineering feats that it took to safely land Curiosity on Mars, it is worth pointing out that content marketing has also played its part.

Cleverly, NASA has utilised social media as a means of spreading interest in the event. Long gone are the days when entire communities gathered around a television to watch grainy black-and-white footage being beamed back from the moon (or TV studio, depending on your conspiracy theory point of view). Rather, a technological first is now presented as online content, digested via Smartphone. 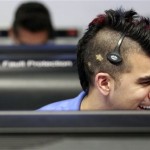 Firstly, the landing was live-streamed over the Web, making an instant Internet celebrity of Bobak Ferdowsi. Now better known as NASA Mohawk Guy, Ferdowsi stood out from the staid crowd at the flight centre thanks to his blue and raid Mohawk, complete with yellow stars on the side. Going from man to meme within minutes – typical tweets included: ‘Becomes an internet sensation. Too busy landing a robot on Mars to notice’, 32-year-old Ferdowsi went from having 200 Twitter followers to nearly 30,000.

But while that is an impressive number, it is but a fraction of the 750,000 followers the Curiosity Rover itself has. Written in the first person (cute!), Curiosity tweets through the tensest moments of the landing – and even provides a YouTube link to the following video.

Now, it’s near-touchdown ‘look out below’ soundbite may not enter popular culture to the same extent that Neil Armstrong’s ‘one small step… one giant leap’ one did all those years ago, but you have to give NASA credit for recognising that the immediacy of content marketing can become a crucial component of its communication strategy.