How to Avoid Social Media Fatigue

We’ve all come to be familiar with social media.  Even those on the marginal fringes of technology have heard of Facebook, YouTube, Twitter or Google+ at some point in their lives.  Those on the opposite end (or at least the other side) of the spectrum more or less interact with social media daily.

We use it to keep track of friends and what they are doing and share with them the same information. Some of us, while they are loath to admit it, actually have no lives outside of social media.  But too much of anything is a bad thing, so is there such a thing as social media fatigue? 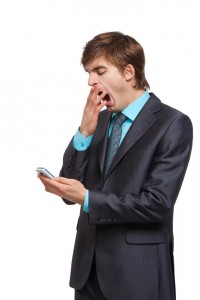 According to a Piper Jaffray survey, interest in Facebook has been sliding down among US teens since last spring up to recently. At least ten percent of 5,000 teens surveyed said they no longer consider Facebook the most important social media. The same survey showed teen interest waning not just with Facebook but also other online platforms like YouTube, Tumblr, Google+ and Twitter.

For Twitter, the current number of users stands at 500 million, but recently only about a third are active tweeters, the rest are just content to read what others are tweeting about without posting tweets of their own.

So is there such a thing as social media fatigue?  Yes, yes there is.

ďPeople want more meaning in their lives,Ē Marcia Scherer, a psychologist and president of the Institute for Matching Person & Technology in Rochester told Hispanic Business. She added more and more people are using social media not just for the socializing and relationships but as a strategic means to meet specific goals.

It was worse for those with mobile devices, as they could just whip it out anytime they want and see what was new. It did not matter if they were lining up for groceries, waiting to cross the street or in a cab, they just had to check, or else they would be left behind.

The need to update Ė When users see a new message from a friend their immediate reaction is to respond, or post something better. This usually starts a twisted endless cycle of stimulus-response in the social media world.

The voluminous ads Ė Want to have a biggerÖwell, you know the rest. Ads have been hounding us since the days of radio, they followed us into the movies, then analog TV, then cable TV, now the Internet. And more companies are now advertising with social media agencies. We pay attention to the interesting ads but even they get tiresome if we see them everyday. It gets even more tiresome if we are targeted by the wrong ads.

Loss of privacy Ė We donít just mean yours. Some things are just meant to be kept private, or at least not broadcast. Yes, we know what you had for breakfast, lunch and dinner, we know where you are, where you are going, who you are with and who you met. Enough information please!

For some it was the choice between the digital life and the real life. Actor and part-time bartender Frankie Delessio also told Hispanic Business that Facebook ďis like watching too much TV. Sometimes you don’t want to watch someone else’s life, but live your own.Ē He reports he was able to write a play with the time he spent off social media.

Despite the mass migrations, other experts said not to expect social media to go belly up anytime soon. A big factor to consider here is that social media is just no longer for socializing anymore.

While there are people quitting the social media, scene small businesses are realizing its potential as a business tool to keep in touch with customers and keep tabs on rivals. Corporations are discovering it can actually serve as an internal communications system and is useful in formulating online strategies.  HR departments are now using social media to keep track of its employees and find prospective ones.  Parents are also discovering it is a good way to watch over their children.

We all reach a saturation point for anything eventually. If you feel social media has taken over your life, and not in a good way the best thing to do is to back off, at least for the meantime. Disable update features on your mobile devices, limit yourself to observer status on social media, go out on your free time and have a good time with friends.

If you feel that backing off is not enough and you have to totally disconnect from all social media entirely then the choice is yours.  Remember that while you can deactivate your account, you can also reactivate it anytime you want.  Many of those who opt for digital detoxification actually just deactivate their accounts then reactivate when they feel like it and return to them later.  One of the nice things about social media is that you can just drop it off anytime you want and pick up where you left off anytime you feel like it again.