In a clever piece of content marketing, online retailer Betabrand has taken advantage of all the hoopla surrounding the impending Facebook IPO to market a range of ‘executive pinstripe hoodies’.

According to the LA Times, the garments have been around since February, but it was Mark Zuckerberg’s hoodie-wearing appearance at a pre-IPO roadshow in New York that created the lightbulb moment for the marketing team. Sure enough, they put the pinstripe versions on sale two days after Marky-Mark’s ‘controversial’ appearance (apparently some fashionistas felt it was unbecoming for a company head to attend an important meeting wearing street clothes).

Better yet, like any good piece of marketing built around compelling, interesting and, in this case, zeitgeist-capturing content, the campaign took on a life of its own thanks to the reach of social media. Even Zuckerberg’s sister Randi got in on the act, tweeting: ‘Inspired by Facebook’s IPO roadshow, Betabrand is now selling “executive pinstriped hoodies” Opening bell worthy? ;)’

Retweets followed, as did blogs, as did articles in newspapers around the world and within 24 hours, Betabrand had sold all 400 of its ‘executive’ hoodies, for US$148 each.

Betabrand’s founder Chris Lindland said ‘Hoodiegate was like pouring nitroglycerin on the fire’ and while he says they got lucky with the amount of coverage they received, this was no accidental content marketing strategy. 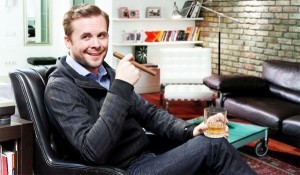 Betabrand specialises in ‘viral clothing’. In other words, it makes and sells clothes that people will talk about online and via social media.

‘To the best of our ability we are influenced by the Internet attention cycle,’ Lindland told the LA Times. ‘We put out two or three products a week, and the question we ask is, “Who would want to talk about this online?”’

It’s a strategy that has worked time and again – from a Farmer’s Market backback for the online food blogger community to bike-to-work pants for the engaged biking online audience. Betabrand has even produced dress pant sweat pants, which look smart but are made with comfort in mind. These were picked up by the likes of Time magazine and ‘went bonkers for us’.