Today’s wars are also being fought through social media content

Propaganda has come a long way in 100 years. Almost a century ago, as the world was heading inexorably towards the Great War (aka ëthe war to end all warsí and World War I), graphic artists were putting their skills to use by creating inspiring posters that would convince the masses that the cause was not only worthy, but winnable. 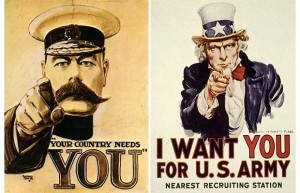 By World War II, propaganda was seen as an essential component of the war effort on both sides. Songs were written to maintain morale, more posters were produced and films were made to convince everyone to do their bitÖ

Fast-forward another 70 years and we see that conflict and war remain far from ended and propaganda remains an integral part of it. The difference, though, is that while propaganda in decades past was carefully planned and took many weeks to produce, these days it is created instantly as social media content.

The current situation in Gaza is a case in point. A historically tense situation moved closer to the brink of another all-out war as a result of tit-for-tat missile and air strikes. One of them, from the Israelis, took place last Thursday and killed Hamas military leader Ahmed Said Khalil al-Jabari. And, in an escalation of the propaganda war, the Israel Defence Forces live-blogged and tweeted video of the attack, alongside a movie-style poster of al-Jabari with the word ëeliminatedí.

Two hours later, the Israelis retweeted the video of its fatal strike ëin case you missed ití. It was also posted on YouTube, where it was watched by over 640,000 people before being taken down for violating the siteís terms of service.

Additionally, the Israelis used Facebook and Flickr to promote Operation Pillar of Defence (ëlikeí the Facebook material to win an army badge), while Hamas, which has used social media to post videos of its rocket attacks on Israel, tweeted in response to al-Jabariís death: ëYou opened hell gates on yourselvesí.

ëWeíre entering a new dimension of warfare,í defence expert Professor Clive Williams of Macquarie University told the Sydney Morning Herald. ëI think in the future other countries will do the same thing because they have so many different options these days of putting out the message. All countries want to control the media. It’s the whole point of embedding journalists in Iraq and Afghanistan. But it is a lot more effective if you can put a message out to people directly and not be reliant on the media.í