It seems like Apple has already thought of and developed everything perfect in the gadgets world.  Is there anything that this multimillion dollar company hasn’t developed yet?

Roll out the checklist and see how the Steve Jobs established electronics company has turned the world over with their expialidocious communication platform and inventions. 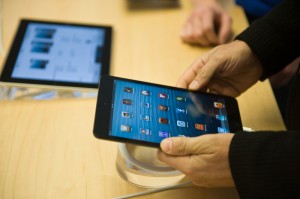 It may seem that Apple has achieved more than any other electronics company has in the past decade or so, however there is actually something that the Cupertino-based company has failed to offer all these years: budget-friendly gadgets.

Yes, of course we acknowledge the fact that Apple has one of leading technologies packed in their devices to optimise performance; and these absurdly—and often creepy—artificial intelligences don’t come cheap.  But if other companies can create more affordable devices, why can’t they?

Well, my friend, dreams can come true and Apple might just have the answers to our prayers.

In a recent report by Citi Research, Apple could be releasing a new iPad Mini 2 that costs less than $250.00 – almost $100 cheaper than the current first generation mini.

“Supply chain checks by Citi’s Asia-Pac Technology Team suggest a mixed shift toward Apple’s older iPhone 4/4S.  And with our expectation of a low-end iPhone slated for September launch, followed by a sub-$250 iPad mini, we expect this trend to persist,” Citi’s Glen Yeung wrote in a note to the company’s investors.

But is this idea even plausible? Or is this just another online strategy to get people hooked and expecting of the iPad Mini 2, only for our bubble to burst come release day that it is still on the $300 mark?

Well, here are a few reasons why it could work and why it wouldn’t work, then you be the judge!

Apple is looking at Customer Retention. Over the past years, the Cupertino, California company has created a sizable following of its products—people who wouldn’t purchase anything but an Apple. But since then, a number of gadgets and devices have already swarmed the market offering at-par items for a lot less. You can get a Kindle Fire HD for only $214, a Samsung Galaxy Tab 2 10.1 for less than $300. So why stay with Apple, eh?

Why it could be a hoax?

Apple looks at improving, not downgrading. Almost all of Apple’s devices now carry a retina display. With this, the iPad Mini 2 may most likely get one for itself. And if it does, then it is less likely that the device will drop price when it just upgraded its specs.

To be honest, we couldn’t really decide whether it’s true or not. While we hope the iPad mini 2 will be a lot cheaper, we can’t really be certain until we see campaigns about it already. Until then, we expect social media to be exploding about everything iPad Mini 2.