Is All Publicity Good Publicity?

We’ve all seen those marketing campaigns that went, oh, so very wrong. They’re often around to clog up our social media feeds for a couple of days, garner some negative attention, and then they die off.

But the real question for marketers is: how damaging was the campaign to the brand?

We’re taking a look at whether or not all publicity is good publicity, and whether you can expect to recover from a serious popular culture blunder.

Logically, no marketers set out to epically fail when it comes to their latest marketing campaign. One company — Dollar Shave Club —ran that risk but nailed it when it made a promotional video filled with swear words (something most marketers would never do).

The Dollar Shave Club is a subscription service that delivers men’s razor blades. The video that we’re talking about featured Michael Dubin, the startup’s co-founder. It cost roughly $4,500 to make and within a week it had three million views.

In this case, the video greatly helped grow Dollar Shave Club’s brand — even though the swearing may have been offensive to some. They started their own YouTube channel, and they now have two million subscribers to their service. Unilever were so not offended that they paid $1 billion to buy the then 5 year-old start-up company.

But not every attempt at twisting humour is so successful. One hugely controversial example is the Protein World campaign that has marketers divided.

The now infamous Protein World advertisement appeared across London Underground stations. It featured a model in a bikini and the tagline, “Are you beach body ready?” 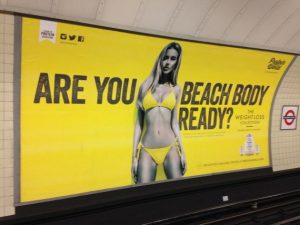 The relatively straightforward ad led to a huge ‘body shaming’ backlash and marketers today still can’t determine whether running an ad that’s so controversial is a good idea.

Protesters gathered a petition calling for the ad’s removal and collected more than 70,000 signatures. The campaign even collected it’s very own hashtag – #everybodysready – that took off on social media channels.

According to Protein World, they think the ad was a good move. They maintained that they did not mean to imply that everyone should look like the model, and they became a household brand name. They also claim the ad resulted in 30,000 new customers and an extra Ł2m in one week.

Maybe the ad drove sales, but it’s a very fine line to walk as a marketer when you disregard public opinion in order to generate leads.

Sometimes, you just can’t come back from your mistakes. They can’t all be spun into something positive like Protein World’s controversial ad. When Carrie Fisher, the world-famous actress died, Cinnabon tweeted an image that generated a hugely negative backlash from social media.

The baked goods brand posted a drawing of Fisher as her best-known character, Star Wars’ Princess Leia, with her famous hair buns replaced with Cinnabon’s trademark cinnabon product. They commented “RIP Carrie Fisher, you’ll always have the best buns in the galaxy.” The backlash was enormous. And in this case, there’s no public proof that the campaign increased Cinnabon sales.

The problem with these types of campaigns is that hindsight is 20-20. How do you know when you’re producing something that it will be seen as funny, middle-ground or widely negative?

While predicting the outcome of sarcastic and cultural campaigns is next to impossible, there are some guidelines you can follow.

First, promoting news to people who aren’t likely to become clients or customers, just for publicity’s sake is almost never worth it. In the event that it creates negative public relations (PR), you might end up reducing traffic to your website.

If the outlet or medium through which you’re distributing doesn’t have the best reputation, you can harm your reputation by association. You can control this by posting your content on your own site where you can take it down if needed — just be prepared to take the full brunt of the backlash should the campaign turn out to create negative feedback.

No one knows your audience and your customers better than your brand. Use your best judgement when it comes to generating the best publicity to help your organization stay successful.