Can online and social media content bring peace in the Middle East?

While the title may seem a little trivial, the sentiment behind what is happening online between these two historical enemies is anything but. We posted last week about the anti-Islam film The Innocence of Muslims and how the way it has been spread through social media is, in effect, a new form of cyber warfare. Well, today we’re bringing you news about a cyber peace-project…

With tensions growing between the governments of Israel and Iran, and talk of war becoming more serious each day, their people – as ever – are the ones who are faced with the greatest threat. So ordinary Iranians and Israelis are attempting to combat the sense of powerlessness they feel with a social media campaign for peace.

‘Israel Loves Iran’ is an online initiative whereby residents of both countries can express their friendship and goodwill towards each other and create ‘a bridge in the Middle East between the people’.

Started by Israeli man Ronny Edri, the initiative began back in March when he posted a photo of himself and his daughter holding an Israeli flag on Facebook, along with an open letter to the people of Iran expressing peace and love. 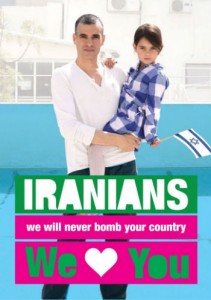 The image – and the message behind it – was picked up and shared all over the world, promting Edri to start a Facebook page and fundraising initiative to take the messages to the streets in the form of billboards and posters. While the fundraising effort has so far fallen well short of its $150,000 target, it has highlighted the plight of the millions of innocent people in both countries who will not only be forced to fight, but also die, should a war eventuate. This powerful message was featured across a banner on the Facebook page recently:

‘We are millions of people who will be hurt. Will be drafted, will have to fight, lose our lives, our relatives. We, parents from Tel Aviv and Teheran, will have to run with our children to the shelters and pray the missiles will miss us. But they will fall somewhere, on someone.”

Here’s hoping they don’t fall at all.