Viral content may be all the rage, but it can also be fleeting. You may have blinked and missed these…

When it comes to the Internet, a week is a very long time. An hour on Twitter is the virtual equivalent to a week in the real world, and more than 24 hours without responding to an email suggests you’re being ignored or someone has died.

Understandably, then, memes and viral content come and go in the blink of an eye. No sooner has a major event occurred than memes are popping up left, right and centre – and in many cases it’s simply a competition to see who can bust out the first joke.

With content enjoying such immediate but fleeting viral success, you’d be forgiven for having missed a few of the most popular memes and videos going around of late. Luckily, your friendly local social media marketing agency is here to help you stay up-to-date… because heaven forbid you look like a Luddite in the middle of an IM conversation.

First there was there the now-famous Antoine Dodson interview, and now an Oklahoma TV station has found the sequel in an interview with this resident who had a lucky escape from a burning building.

And here’s just one of the hilarious remixes that has since emerged and gone viral:

For those not following the explosion of Dubstep (a music genre that sounds like transformers in the throes of pleasure), let us fill you in: Skrillex is the reigning king of the genre. He’s won a bucketload of Grammies, achieved international fame and has a throng of loyal followers that is growing by the day.

And yet many still don’t know what to make of the music style he’s helped make famous. Including, it would seem, kids. Ah well, from the mouths of babes and all that…

There’s no denying that Morpheus (the character from The Matrix played by Laurence Fishburne) is one hardcore dude. The latest viral meme doing the rounds is actually fairly clever as well: 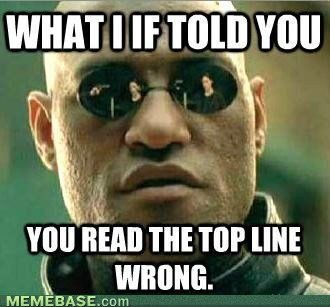 Have we missed any memes or viral content you think we should know about? Just let us know…