Has a long-lost Leonardo da Vinci masterpiece been discovered? 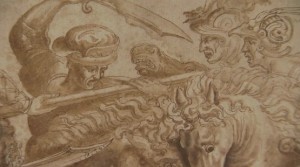 When it comes to your personal list of history’s greatest content creators, which names would feature? We’re betting Shakespeare would make it; The Beatles, perhaps; Banksy, maybe (and while we’re considering ‘graffiti artists’, how about the anonymous scribblers who created the Paleolithic cave paintings at Lascaux in France some 17,500 years ago?)…

So, understandably, people are getting quite excited about the increasingly probably discovery of some lost Leonardo content hidden under an old fresco in Italy.

According to a BBC report: ‘It is believed da Vinci started painting his fresco – which is considered by some to be his finest work – in 1504 but abandoned the project because of problems arising from his experimental oil painting technique. The room was later renovated and Vasari painted his fresco in 1563.

‘Seracini believes Vasari did not want to destroy da Vinci’s work and instead bricked it up behind a new wall on which he painted. His theory was stimulated after finding a soldier on Vasari’s work holding a small flag bearing the words: “He who seeks, finds.”’

Tiny probes are currently being sent through the Vasari piece to explore what lies beneath, and have reportedly found black pigment used in the Mona Lisa.

Seracini’s theories have drawn their share of criticism, and even derision, but if he’s right he will have uncovered one of the content finds of the last half-millennium.