The dark side of social media has been on display recently after a young woman was driven from Twitter as a result of the scorn, ridicule and contempt that was virtually poured on her as a result of what was a rather silly question posted on the micro blogging site.

On Sunday, as Roger Federer was beating Britain’s Andy Murray in the men’s singles final at the Wimbledon, 21-one-year-old Georgia Ford, known in the Twitterverse as @Georgia_Ford, asked: ‘Is Wimbledon always held in London’? 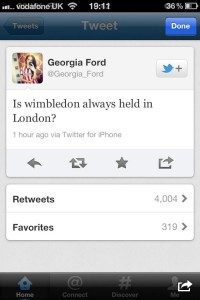 Ms Ford comes from the north of England (Sunderland, to be precise), so should perhaps have been expected to know that Wimbledon, with its SW19 postcode, is indeed a suburb in her country’s capital. And while many non-tennis-following, non-strawberries-and-cream-scoffing Britons doubtless tuned in to the Championships for the first time as a 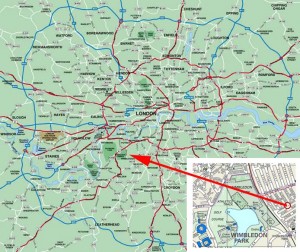 result of Murray’s presence in the final – the first time someone from the UK has made it that far in 74 years – Wimbledon is such an indelible part of British summer culture that Georgia really should have known that the All England Lawn Tennis Club is indeed headquartered in the suburb from which the tournament takes its name, and that moving 17 courts and multi-thousand-seater stadia around the country isn’t the most practicable course of action.

But, did she really deserve to be forced to close her Twitter account as the result of all the opprobrium (which could easily be seen as a form of bullying) she received?

Georgia’s comments were retweeted 7000 times, with the vast majority of people ridiculing them: ‘My faith in humanity is depleting rapidly,’ commented one user. ‘Not the sharpest tool in the toolbox,’ added another. 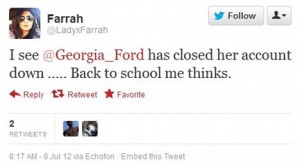 Some, including respected journalist Paul Lewis, tried to defend Ms Ford, pointing out that until 1965, Wimbledon was actually part of Surrey rather than the London district it subsequently became as a result of the metropolis’ exponential outward expansion.

But by then the damage had been done – Georgia Ford had been badly burned by the mob mentality side of the social media beast.

And therein lies the rub… We all say – and do – stupid things. In most cases, though, those things are witnessed by a handful of people, not several thousand. Social media acts as an amplifier, multiplying an audience at a stroke. It is why content marketers are using social media to sell their products or spread their message.

But this case also shows the importance of marketers using social media correctly. Because if you don’t, your brand could end up with some serious egg on face. Think before you tweet is the moral of the story.