How to get the sweet smell of content marketing success 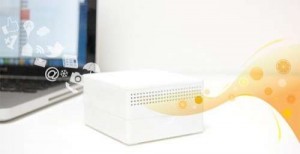 Meet Olly. He’s only little, but he could soon become one of those next big things people get so excited about.

Olly is a robot who monitors social media conversations and, when a person or brand is mentioned, emits a waft of scent. It’s like a cross between existing social media-monitoring devices that display their findings on screen and the air fresheners you find in public bathrooms.

According to Olly’s inventor, Benjamin Redford, the idea is ‘to reward people in the physical world for their digital and social interactions’. Smell emerged as the sense to treat because a whiff of perfume can catch the attention without proving too distracting.

As Redford told the BBC: ‘We are gradually spending more and more time on screen and it’s good to have some other form of sensory stimulus rather than just video and audio.’

Which is where Olly (short for olfactory) comes in – providing a means of monitoring online interaction without having to rely on screens, notifications or other message streams.

At this stage, Olly is likely to appeal most to individuals, particularly as the design plans for it have been placed online under a creative commons licence, meaning ‘he’ can be built by anyone. (Or, more accurately, anyone who knows enough about electronics, 3D printing and computer programming.)

But as with everything else to do with social media, where a handful of individuals lead, companies and brands inevitably end up following because they need to be where the individuals are.

So while it may be a stretch to imagine a Coca-Cola scent being emitted every nano-second the soft drink is mentioned on social media as a conversation-monitoring device, the fact that Olly is able to produce customised smells is already being utilised by savvy content marketers.

A US chef has reportedly ‘loaded his Olly with the essence of tortilla to monitor when his restaurants were being mentioned online.’ Benjamin Redford also reports corporate interest, citing an unnamed company that has decided to manufacture lots of the robots to help with a marketing campaign due to launch later this year.