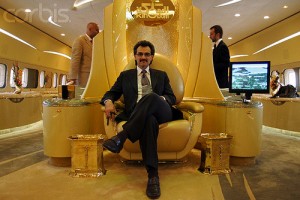 What do you do if you want to own the future of the media?

You invest in Twitter, of course – which, according to the Wall Street Journal, is exactly what Saudi prince Alwaleed bin Talal has done through his primary investment vehicle, Kingdom Holding Co.

The prince, whose company owns a number of stakes in News Corp, Apple Inc and Time Warner, is an avid believer in the power of the media, and if his recent purchase is anything to go by, he’s a convert to new media as well.

For a reported $US300 million, the man known as ‘the Arabian Warren Buffet’ bought just over three per cent of Twitter. With much of the Arab world having experienced social media-fuelled revolutions over the past year, it’s interesting to see such an investment made by a key figure in the Middle East.