Anonymous are at it again. Back in February, The Message questioned whether the loosely connected network of hactivists was facing extinction as a result of concerted, coordinated action by international police forces.

This article led to the comment ‘We are still here’ being posted on our messageboard.

They most certainly are. It seems that barely any news event passes without Anonymous (or someone who would dearly like to be part of Anonymous) posting warnings. The recent, tragic radio station prank call furore is a case in point. As a result of nurse Jacintha Saldanha committing suicide after being duped by two Australian DJs, Mel Greig and Michael Christian from Sydney’s 2Day FM, Anonymous posted a threatening message on the Internet.

The message itself has been taken down from YouTube ‘as a violation of YouTube’s policy on depiction of violent activities’. However, this ABC News report on the sad affair carries extracts from it (from 1:12).

Some commentators have been quick to point out the irony of an organisation that dedicates itself to ‘trying to fight criminal activities by governments and corporations’ aligning itself with the Establishment response to the event. There is certainly some truth in that, but it also serves as proof that policing the world of online content is almost impossible. 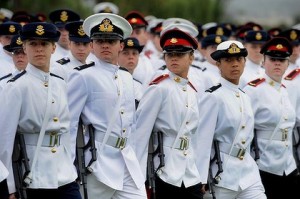 Indeed, online content itself is a prime target – as the Australian Defence Force can testify.

The Canberra Times reports that last month, a lone hacker committed ‘one of the worst known cyber attacks on a government organisation in this country’ by breaching a university database at the Australian Defence Force Academy and stealing the personal details of thousands of Australian military staff. The details were then posted on websites linked to Anonymous.

The hacker, known only as Darwinare, is quoted as saying that he was acting ‘for fun’ and was shocked at how easy it was to gain access to the information, adding that the whole attack ‘took like three minutes’.

It serves as a salient reminder to businesses and individuals alike that while utilising online and social media content is a wonderful marketing tool, you have to take steps to protect it and the malicious access that can be gained through it.