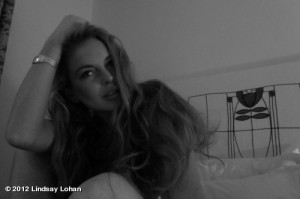 Anyone who has ever seen a football player tweet, an actress post a questionable photo on Facebook or Charlie Sheen do… well, anything, would have to agree: famous people are not so great with the ol’ self-edit function that comes as a factory standard in most mere mortals’ brains.

In fact, it has been suggested more than once that these tempestuous tweeters, foolhardy Facebookers and idiotic Instagrammers should be rounded up into a virtual celeb-cage where their social media ramblings could be somewhat contained.

Perhaps this is one of the raisons d’?tre of WhoSay, a new social network that already boasts an impressive celebrity clientele (including, as pictured, Lindsay Lohan) – perhaps attracted by the exclusive door policy that requires an invite to join.

Of course, anyone can still view the content of the site, but you’re required to sign in through Facebook and Twitter. If you want to create a profile, however, you need to be invited. Which means it’s kind of like the social media version of the Emmys – which, incidentally, is where the new network started to gain media attention, after the cast of Modern Family and other stars posted pictures of the highlights of the night.

In case you were wondering about highlights, there were two: actress Sofia Vergara’s left and right butt-cheeks. The asset-rich actress didn’t wait for the mags or tabloids to publish the pictures (or the story) of the wardrobe malfunction that left her zipper on her seat, tweeting a picture of her offending derriere and then posting the image to her WhoSay account with the caption: ‘Yes!!! this happened 20 min before we won!!!! Jajajajja. I luv my life!!!!!’

In an instant, the curvaceous Colombian not only trumped the paparazzi, but has also potentially put a gaggle of caption writers (who typically make a living using terms like ‘asset-rich actress’ and ‘curvaceous Colombian’ to accompany a typical pap-sourced photo spread) out of work.

According to its website, WhoSay is ‘your celebrity network’, where ‘artists and athletes share their lives, their work, their favourite things.’

In practice, though, it is a direct-sourced celebrity gossip mag. The premise is actually brilliant: the majority of celebrities love to talk about themselves, so why not give them free reign in a platform where they feel… exclusive? No issues with privacy infringement, no hiring journalists – and if you see a picture of Kate Middleton’s boobs, it’s because she (or one of her exclusive friends) has posted it. It’s user-generated content that people usually fork out to see in magazines.

Of course, we’re guessing there won’t be as many ‘stars without makeup’ or ‘celebrity cellulite’ stories, but at the end of the day, you’ll still get to see Sofia Vergara’s arse.