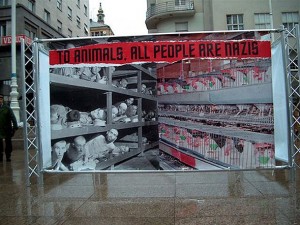 Advertising is all about getting people to take notice of something, so it would seem the creative team behind a new YouTube ad from People for the Ethical Treatment of Animals (PETA) have more than fulfilled their brief. Unless, of course, you think that an ad that equates eating fish to sexual assault and domestic violence is out of order.

‘PETA’s mission is to get the animal rights message out to as many people as possible… We will do extraordinary things to get the word out about animal cruelty… It is sometimes necessary to shake people up in order to initiate discussion, debate, questioning of the status quo, and, of course, action.

‘Thus, we try to make our actions colorful and controversial, thereby grabbing headlines around the world and spreading the message of kindness to animals to thousands – sometimes millions – of people. This approach has proved amazingly successful.’

This new ad is clearly a continuation of the same ‘successful’ strategy. It shows a screaming girl watching a man beat her mother, an attacker grabbing an elderly woman’s blouse and a bloodied schoolboy being kicked to the ground. It then shows a fish on a chopping board, opening its mouth, with the words:  ‘Some screams can’t be heard.’

At time of writing it has been viewed over 62,000 times, but you can bet that the media coverage it is receiving will boost that. The question, though, is does the end justify the means? As reported elsewhere, the ad has come in for criticism from organisations that deal with the likes of sexual assault:

‘To throw this in somebody’s face without any warning is quite unethical,’ said Karen Willis, Executive Officer of the New South Wales Rape Crisis Centre. ‘When I think of that ad, all I’ll remember is the girl screaming and the woman being robbed, not the fish on the chopping block.’

Media commentator Professor Catharine Lumby concurred: ‘I am concerned about the use of violence against women and children being used as bait for political campaigns.’

Here’s the ad in question. What do you think? Acceptable – or outrageous?