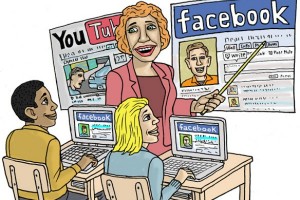 Moreover, the Director of Public Schools, Diane Marshall, recently told an education forum that she believed social networking would play a ‘major role’ in education. Which is obviously good news for content providers.

Social media sites have been identified as conduits for bullying (although as The Message has reported, they have also been used to successfully counter it), but the NSW Federation of Parents and Citizens Association believes access to social media while under teacher supervision will actually ensure responsible use.

Association spokesperson Rachael Sowden has said: ‘Kids are actually accessing it at school anyway on their mobile phones. It’s better to help support our students rather than put our heads in the sand and hope they don’t access it by blocking it. We’d much rather have policies in place that support its safe usage.’