On Monday night, loyal Gaga fans lined up for nearly seven hours in the cold in Sydney’s Taylor Square, then waited for some hours in the sweltering heat of Darlinghurst clubs Nevermind and Arq to dance to three of the Lady’s songs. The drawcard was, the star herself performed them. 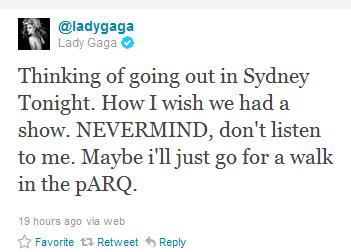 ‘I would like to pay tribute to her for using her star power to focus attention on the prejudice directed at gay men and women,’ Ms Moore said. ‘Lady Gaga has been a powerful force for the gay and lesbian community in Sydney and we have a rare honour for people whose achievements embrace the ideals and spirit of our city – Honorary Citizen of Sydney.’

The surprise shows have come to be a trademark of the social-savvy starlet, as she embraces Twitter and Facebook not only to self-promote, but to reward the loyalty of her fans, who for their part, adore her.

It’s a relationship that is largely unmediated, and one that provides much of the content of Gaga’s projects. More so than most of today’s pop stars, Gaga has embraced a content currency, whereby she trades online titbits for ongoing loyalty. With over 36 million Facebook fans and 11.5 million Twitter followers (for some context, that’s more than Barack Obama), we’d hazard a guess that it’s working.

The content flows both ways, however, and Gaga is more than happy to include fan content into her projects. Recently, her new single ‘Edge of Glory’ was released. Within hours of the release, fans began offering up their own reactions to and interpretations of the song, from covers to dance-moves and lip-syncing. Gaga responded with an invitation for more fans to do the same, and the result was a gaggle of Gaga-fans making her single their own.

She collated her favourite content to create a tribute video (which also doubled as a commercial for Google Chrome), which aired on the season finale of Saturday Night Live on 18 May in the US. You can check it out here:

Love her or hate her, there’s no denying Gaga understands the power of content to connect with people. She seems genuinely grateful to and in awe of her many fans, and rather than creating content for the sole purpose of attracting followers, the content itself is the purpose.

It is this difference that sets her apart from so many other brands (and let us make no mistake, she most certainly is a brand), and one that should stand as an example for content-creators everywhere: commit to your content. Make it the focus. The rest will follow.

@TickYes
Thorne in the Side