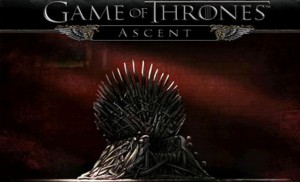 Last year, it was all about Breaking Bad. This year, it’s Game of Thrones that has secured top spot in the hearts and minds of TV enthusiasts around the world. The television show, based on the bestselling novel series A Song of Ice and Fire by George R.R Martin, has achieved international success and captured the imaginations of fantasy-lovers. With gratuitous sex and violence, as well as murder, intrigue and, of course, dragons, the tale is a gripping one.

That’s right: the popular series will soon be taking its place alongside the likes of FarmVille as a Facebook game. Well, perhaps ‘alongside’ FarmVille is the wrong term, because if author George R.R Martin has anything to do with it (which he does), it’s going to be a lot more interesting.

This is what he had to say about the venture: ‘Surely, I thought, there must be something one could do on social media that would be more fun than growing turnips and feeding chickens. Like, say, scheming and plotting, murders and marriages, contesting for power.’

Created by Distributer Beam, Game of Thrones: Ascent will feature constant updates to keep it in line with the unfolding events of the TV series, and players will be able to align themselves with a noble house from within fictional Westeros in order to help them stake a claim to the throne.

There will be murder, intrigue and plotting, just like the series, and while there’s no official word on when the game will be released, fans are already flocking to its Facebook page to get updates and teasers.

Employers, beware – a whole lot of people are about to get a whole lot less productive at work.