How will Xbox Music fare in the already crowded world of music subscription services? 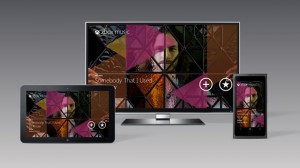 Despite the fact that we’re living in the age of illegal downloads – music and video alike – it seems there is definitely still gold in them thar music subscription services (of the legal kind), with Microsoft the latest player to enter this increasingly crowded market.

Xbox Music has just been unveiled, but don’t let the name fool you, because although currently only available to the 66 million-odd (as opposed to the 66 million odd) Xbox 360 users, from next week (26 October, to be precise, when Windows 8 operating system is unleashed on the world), the streaming music service will be launched on mobiles, tablets and PCs.

In fact, the Cloud-powered service will be the default music player for Windows 8, with Microsoft confirming that Xbox Music apps will also be available for Windows Phone 8 and, later, Android and Apple. Which of course means Microsoft is not only angling for a slice of the same musical pie as Spotify, Pandora and MOG, but also the likes of Google Play Store and, the big one, iTunes.

Cleverly, Xbox Music will be available at three levels (and prices). As the Sydney Morning Herald reports:

In fact, Microsoft may already have the jump on Apple – and how long has it been since it was able to say that? If the software giant is to be believed, it has a catalogue of 30 million songs, making it the biggest of the lot. By contrast, Apple says it has 26 million in its catalogue.

‘Our aspirations for Xbox Music are big – to address the multiple ways that people are listening to music, then put those all in one easy-to-use and beautifully curated place,’ said Scott Porter, principal program manager for Xbox Music.

‘Music is a deeply, emotionally connected topic for people everywhere. People’s memories and special moments are always associated with music,’ added Yusuf Mehdi, vice-president of Microsoft’s interactive entertainment business marketing and strategy. ‘It’s a powerful area because of that, and I’m excited that we’re going to be able to bring that to life in our product.’

Or to put it a different way: ‘We’re going to make those bastards dance to our tune for a change’. Stay tuned…