The Content Debate: There is No Such Thing as an Original Idea (part 2)

There’s no such thing as an original idea these days. In fact – there never has been, but the ubiquity of social media and the saturation of content in our lives make it truer now than ever. We are so informed, inspired and influenced by the world around us that creativity is simultaneously owned by everyone and no-one.

Bloggers, journalists and other social commentators will have experienced the phenomenon of moving in a common direction or exploring ‘new’ ideas at the same time as their peers to produce content that reflects similar concepts.

This isn’t plagiarism. It isn’t copying. It isn’t even derivative. It is simply an example of content producers tapping into the global inspiration pool – or, to put it another way, the universal content consciousness that exists everywhere at all times. Far from trying to reject this metaphysical library of ideas (which is impossible in any case), people are finding new ways to share and access it.

We’re willingly uploading inspiration in more ways than ever before, fuelled by the possibilities afforded us by social media. Here are two examples of websites that help you embrace it. 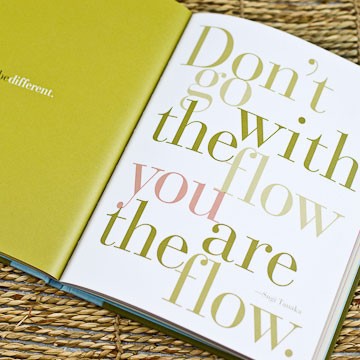 Developed with inspiration in mind, the creators of Pinterest encourage us to ‘think of [the site] as a virtual pinboard – a place where you can create collections of things you love and “follow” collections created by people with great taste.’

Basically, Pinterest is like a visual Twitter, where you can share images you find beautiful or meaningful and watch as others do the same. It’s a brilliant way to collect the things that plant the seeds of inspiration all in one place, where you can access them when you’re in need.

Ideas are funny visitors. They arrive at the most inopportune times… like when we’re in the shower with no pen, or when we’re about to fall asleep and can’t muster up the energy to jump out of bed and tackle them head on.

Elizabeth Gilbert, in a TED Talk ‘A New Way to Think About Creativity’ expanded on the concept of ideas being fleeting, momentary visitors, and content producers such as poets and musicians and artists simply being the earthly vessel to get them heard.

Whether or not you subscribe to this view, it’s fact that ideas come and go. Wridea is a website that could put an end to this particular problem Described as a ‘free online idea management and collaboration service’ (don’t you just love the concept?), Wridea lets you record fleeting thoughts and inspiration and organise ideas by keyword or category. It also allows you to ask for help and join collaborations.

Memories fail us and are unreliable. With Wridea, all the brilliance that visits you momentarily can be instantly recorded for later use (and yes, it is available in app form), which means now your only obstacle to greatness will be figuring out how to take your iPhone in the shower with you…

•    The counter-argument will be posted in the next post.