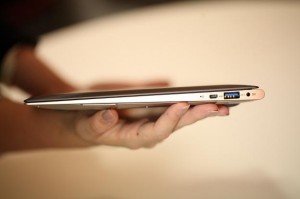 Geek week, or (as they’ll insist on calling it) the ‘2012 Consumer Electronics Show’, is drawing to a close – and without question some of the most-hyped products to be shown have been Intel’s Ultrabooks.

‘What is an Ultrabook?’ we hear you cry. Relax, gentle readers, you’re about to find out…

The company line from Intel is that the Ultrabook is something that will ‘usher in a new era of computing and make everything else seem like ancient history.’

Spin-free, this means Intel has taken the things we love about notebooks, culled the things we don’t love, and rolled them all up into the next generation. Word on the street is that the Ultrabook is the PC world’s biggest step towards competing against Mac products in quite some time, jumping onboard with the whole ‘sleek, fast, thin’ idea that Apple has been honing for years.

What you need to know first and foremost is that the Ultrabook isn’t one laptop, it’s an entirely new category of laptops. Just like a Notebook isn’t just a one-brand, one model type of thing, the Ultrabook will be a category unto itself, into which any PC manufacturer will be able to enter. 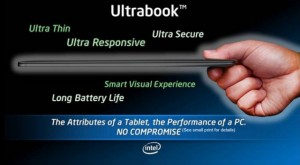 Which means there will soon be a range of laptops that span the $800-$1500 price range, will all be super-quick and will all have touch-screens. This last factor is key, as it plays on the recently realised need we have to physically engage with our computer screens (remember when touching your screen was a no-no?) without compromising on the keyboard.

And yet a touch-screen isn’t the only way we can get up-close and personal with the Ultrabook. Gesture and voice recognition are two features that have gamers all excited, and while the technology hasn’t been fully explored yet, it is likely to be this feature that sets the Ultrabook apart most of all.

Intel predicts that by 2015, over 40% of laptop sales will be Ultrabooks. If PC manufacturers take up the torch and build on the tools Intel has given them, that percentage could be much higher. As long as the focus is on the quality of the functions rather than the functions themselves, the Ultrabook may well be the answer the PC world has been waiting for.

And as far as content providers are concerned, it’s functionality and range of intuitive features could make it a match made in techy heaven.