A little while ago we brought you the Angelina Jolie leg-meme on The Message. Trivial and fun as it clearly was, ol’ Mrs Pitt didn’t appreciate the joke, and when asked about the meme in an interview with the Huffington Post recently, she made it abundantly clear that the whole thing was beneath her:

‘I honestly didn’t pay attention to it. You know what I mean? I do’’t watch those TV shows and if I go online and see something about myself, I don;t click on it. And the people I surround myself with don’t really talk about that kind of stuff. [Laughs]. I heard something, but I didn’t pay any attention. It’s as simple as being a woman picking a dress you like and having a night, and not really thinking about anything else.’

Not that Ms Jolie was wrong in her reaction, or handled the situation poorly, but it pays to have a sense of humour about yourself – especially when the rest of the world does, too.

Perhaps she could take a leaf out of Hillary Clinton’s book, as the former First Lady, current US Secretary of State and all-round fabulous female recently found herself in a similar situation.

Texts From Hillary is a Tumblr that sprung up around an image of Ms Clinton in an aircraft hangar texting. The ‘LOLZ’ come from the positioning of other famous people snapped while texting, complete with made-up subtitles and responses supposedly from Hillary.

After hearing about the site, Hillary and her staff decided to submit a guest-post to the site, pictured here: 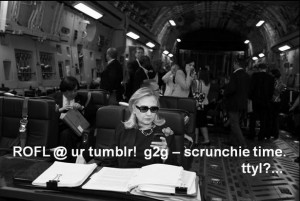 After sending a signed note thanking the creators of Texts From Hillary for ‘the many LOLZ’ to confirm the post came from the Secretary herself, ‘Hillz’ (as she is known on the Tumblr) was able to sit back, relax and bask in the glow of a million hipsters becoming Democrat voters.