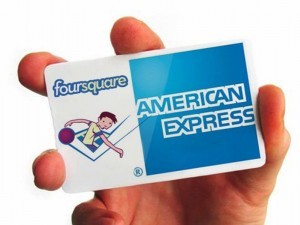 Last week, The Message brought you news of the rise of payment apps and how they are not ñ yet ñ likely to replace traditional means of buying goods. Give it a few years, however, and we all know itís likely to be a different story.

Clearly, the people at American Express can also see the day coming when mobile money transacted through Smartphones is going to pose a series threat to credit cards and have decided to make a pre-emptive strike.

The scheme has been launched to counter the push being made by other companies to mobile payment apps. Participants sync their credit card to Foursquare to be eligible for certain offers.

ëWe are trying to do is build a multi-faceted experience so that a user, who might be opening an app to see where their friends are or a recommendation of where to go next, might stumble upon a deal,í Foursquareís Chief Operating Officer Evan Cohen told the BBC.

American Express clearly thinks this partnership will pay dividends, because although it does not share data on its membersí spending habits with Foursquare, it can provide information that could prove invaluable to the social media and content marketing strategies of participating businesses.

ëMerchants can host these types of special without needing to train their staff, which can be timely and cost prohibitive,í said Stacy Gatz, Amexís Vice President of International Social Media Strategy. ëWe can then go back to the merchant and give them information about the number of people that redeemed the offer and also the amounts that the card members were spending, so we can provide to them pretty rich data.í

Whether this strategy can match the growing appeal of technology remains to be seen, but clearly the traditional players arenít about to go down without a fight.

The Message is brought to you byÝTick YesÝñ providing solutions for all your digital and content marketing needs.