Barack Obama not only retained the US presidency yesterday, 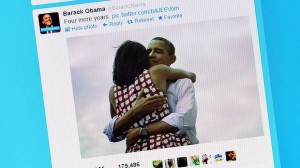 but he also affirmed his position as the worldís most tech-savvy, social media-aware politician.

Barely had his victory been confirmed, and hours before he gave a more traditional winnerís speech, Obama took to social media to proudly proclaim ëfour more yearsí. The announcement came in the form of a photo of the re-elected president embracing his wife Michelle posted on Twitter and Facebook ñ a photo that has now been retweeted over 737,000 times and received almost 3.7 million ëlikesí.

In terms of online appeal, the responses on both social media platforms are records, with Facebook confirming, ëThis Barack Obama photo is the most-liked Facebook photo of all timeí.

The immediacy of social media has also been a boon for other politicians from around the world, with many taking to it to congratulate Obama.

Not all tweeters, however, are so enamoured of the result. Donald Trump, in particular, has taken to the micro-blog site to voice his disapproval: ëThis election is a total sham and a travesty. We are not a democracy!í he proclaimed.

All of which confirms that if you want to be in on the conversation, you have to be on social media.