The End of the World As We Know It?

Last week saw several high-profile men shamed, including Arnold Schwarzenegger and Dominique Strauss-Kahn. But it was another man’s credibility that was more thoroughly terminated. Pastor Harold Camping’s prediction that ‘the Rapture’ would occur on 21 May and all good Christians would be beamed up into heaven was met with (mostly derisive) global attention, much of which played out over social media.

When 21 May came and went with Christians the world over remaining firmly planted on the ground, it’s fair to say Camping was left slightly red-faced. His explanation? A simple miscalculation. The real rapture, he said, will occur on 21 October.

It’s an easy mistake to make, we suppose – after all, fundamentalists of Camping’s yoke have never held science in much regard, so it stands to reason that mathematics wouldn’t be his strong suit either…

Regardless of whether doomsday prophecies are your thing or not, the real question here is why Camping’s prophecy (note that he’d already mistakenly predicted the end of days would arrive in 1994) caused such a stir? What is it about news stories like this that get the whole world talking?

Seth Godin’s modern philosophy often has a brilliant explanation for phenomena such as this, and this case is no exception. He wrote:

‘How does one market the end of the world? After all, you don’t have a big ad budget. Your “product” is something that has been marketed again and again through the ages and it has never worked. There’s significant peer pressure not to buy it…

‘And yet, every time, people succumb. They sell their belongings, stop paying into their kid’s college fund and create tension and despair.

‘Here’s the simple lesson: Sell a story that some people want to believe. In fact, sell a story they already believe.’

Anyone raised with even a semi-Christian upbringing will be vaguely familiar with the concept of the end of days or the ‘Second Coming’. While we grow into our own spiritual (or non-spiritual) beliefs and understandings as we develop, those stories we recognise seem to resonate with some long-forgotten part of us.

So while we may not believe the messenger, or even the story itself anymore, there is something about the familiarity of the story that pushes us to take notice.

And take notice we did, as shown by this infographic from Mashable: 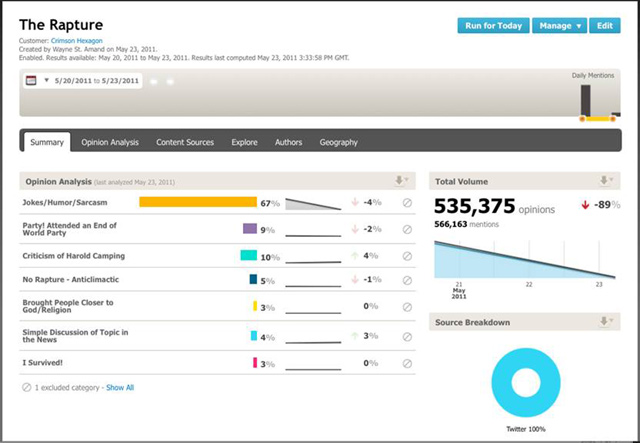 There is a lesson here for content producers and content marketers. find the resonance in your story. To access some collective memory, some shared belief or even some global fear is to pique the interest of the public.